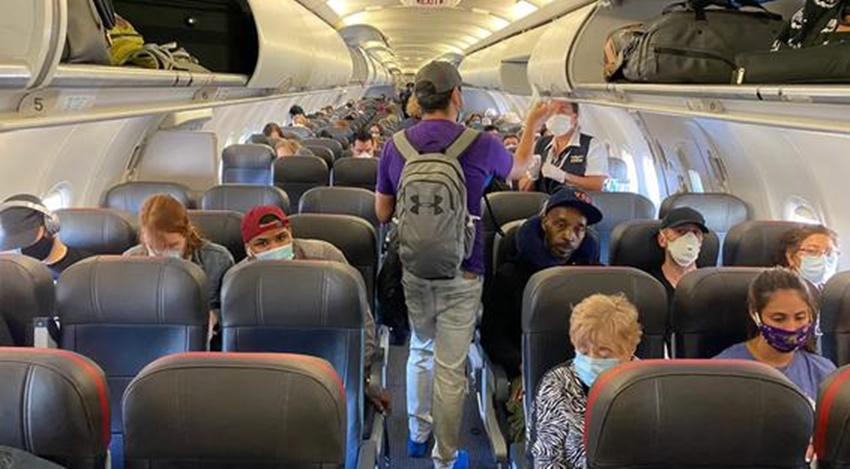 Several United States airlines announced that the mask would no longer be mandatory, at least on their internal flights

U.S. airlines made wearing masks optional on their planes on Monday after a judge ruled a federal requirement to wear them on U.S. public transportation illegal.

Magistrate Kathryn Kimball Mizelle of Tampa, Florida, ruled that the Centers for Disease Control and Prevention (CDC) – the main federal health agency – had exceeded its authority in imposing the requirement, which applies to airplanes. , trains, subways and buses, among others.

Several US airlines quickly announced that the mask would no longer be mandatory, at least on their internal flights.

United Airlines specified that the change would be effective “immediately” on its internal flights in the United States and some international flights, according to the rules in force in the countries of arrival.

“That means our employees will no longer be required to wear masks – or force them on passengers, in most cases. They may decide to wear one, since the CDC continues to strongly recommend wearing a face mask on public transportation,” said a spokesperson for the US group, which was among the first to impose the anti-Covid vaccine on its employees.

American Airlines and Delta made similar announcements. Masks “well-fitting protect the person wearing it, even if people around them are not wearing it,” Delta said.

“The masks were like boarding passes for almost two years, – (it was) impossible to fly without them,” Alaska Airlines noted, before indicating that they are now optional, except on flights to or from Canada.

This company also evoked in a statement the case of passengers banned because they refused to wear a mask.

“According to our reports, some customers whose behavior was particularly offensive will continue to be banned, even after the mask rule is lifted.”

Southwest Airlines pointed out that the air on board its planes is constantly renewed with ventilation systems that filter “99.97% of the particles in the air.”

The Joe Biden administration has recently been under pressure from those calling for relaxing or repealing the obligation to wear masks. Some 20 Republican-led states and several airlines have called for an end to the measure on airplanes and other public transportation.

But last week, federal authorities decided to extend the mask requirement until at least May 3 due to a surge in cases.

According to a senior presidential official, this decision “means that the CDC order to wear a mask on public transportation is not in force at this time.”

The Transportation Security Administration (TSA) will therefore not enforce the obligation, he specified on condition of anonymity.