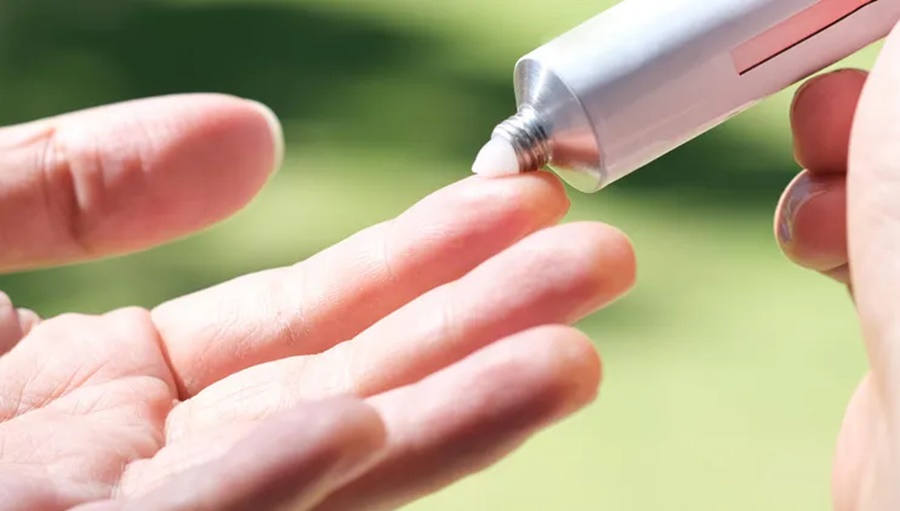 What can be done to get the problem under control? Read what treatment helps. / What should you do if you have a sun allergy?

A sun allergy (technical term: polymorphic light eruption) manifests itself as a severely itchy rash in areas that have been directly exposed to unusually intense UV radiation. Anyone who has ever had such sun eczema usually develops it again and again over the years – in local latitudes usually in spring or out of season during a sun holiday.

The good news: A sun allergy can be treated effectively. Acute symptoms improve with simple measures such as consistent sun protection. And if you do something against the sun allergy in good time, you can even prevent it from occurring.

Acute sun allergy – what to do to protect the skin?

In order to treat an acute sun allergy, it is particularly important to avoid further UV exposure of the skin. This applies in particular to UV-A radiation, as this is the most common trigger for the symptoms: around 90 percent of people with polymorphic light eruption are particularly sensitive to UV-A light.

So the best thing people can do when they have an acute sun allergy is get out of the sun. If you cannot or do not want to avoid being outdoors completely, you should consistently protect your skin from light. First and foremost, this means wearing long, sun-protective clothing. In addition, it is advisable

Sometimes certain cosmetics can also cause a sun allergy – such as Mallorca acne, which is considered a special form of polymorphic light eruption. It is therefore advisable, as a precaution, not to use greasy creams or oils as sunscreens, but rather gels or hydrophilic creams.

What helps against the sun allergy rash?

If the skin is consistently protected against UV radiation after the onset of the sun allergy, the symptoms will soon (usually after a week) go away. What those affected can do themselves against the itching until then is: gently cool the affected areas of skin – for example with damp cloths.

If that doesn’t help enough against the itchy sun allergy rash, treatment with a topical remedy may help. Sometimes the application of a white shaking mixture (Lotio alba), which those affected can have prepared in a pharmacy, provides relief.

An antihistamine may also help against the itching of acute sun allergy. The treatment can be done with tablets or externally (e.g. with Dimetinden 0.1% gel). However, antihistamines usually only have a weak effect on polymorphic light eruptions.

Doctors therefore prescribe glucocorticoids (“cortisone”) for some of those affected to relieve the itching in acute sun allergy – such as a hydrocortisone cream for local treatment of the affected skin areas. In severe cases, cortisone tablets are sometimes the only thing that helps.

In the case of the special form of sun allergy known as Mallorca acne, a so-called keratolytic treatment can also cause the rash to heal faster. Creams or gels (e.g. with a vitamin A derivative such as adapalene or tretinoin) are used externally, which are intended to dissolve the upper layers of the skin.

The itching associated with the sun allergy rash is often severe, so that those affected can hardly avoid scratching themselves. If skin injuries occur, bacteria can easily penetrate the skin and cause inflammation. Antibiotic tablets prescribed by a doctor help against such a bacterial superinfection.

What helps to prevent sun allergy?

Acute sun allergy can be treated well. But without preventive measures, there is a high probability that the itchy rash will return next year. What helps against such recurrences in sun allergy is getting used to UV light at an early stage.

Repeated irradiation of the skin with UV light in slowly increasing doses is suitable for this purpose: This is intended to harden the skin so that sunlight no longer triggers sun allergies. In order for this so-called light or photo hardening to work, it must take place at least four to six weeks before the first strong exposure to the sun.

However, UV radiation can have undesirable effects, such as sunburn-like skin damage or inflammation of the eyes. So there are certain risks involved in treating a sun allergy preventively. What those affected should not do under any circumstances is to harden their skin against UV light themselves – for example in the solarium. Only with photo-hardening under the supervision of a specialist doctor can it be guaranteed that the UV exposure remains as low as possible.