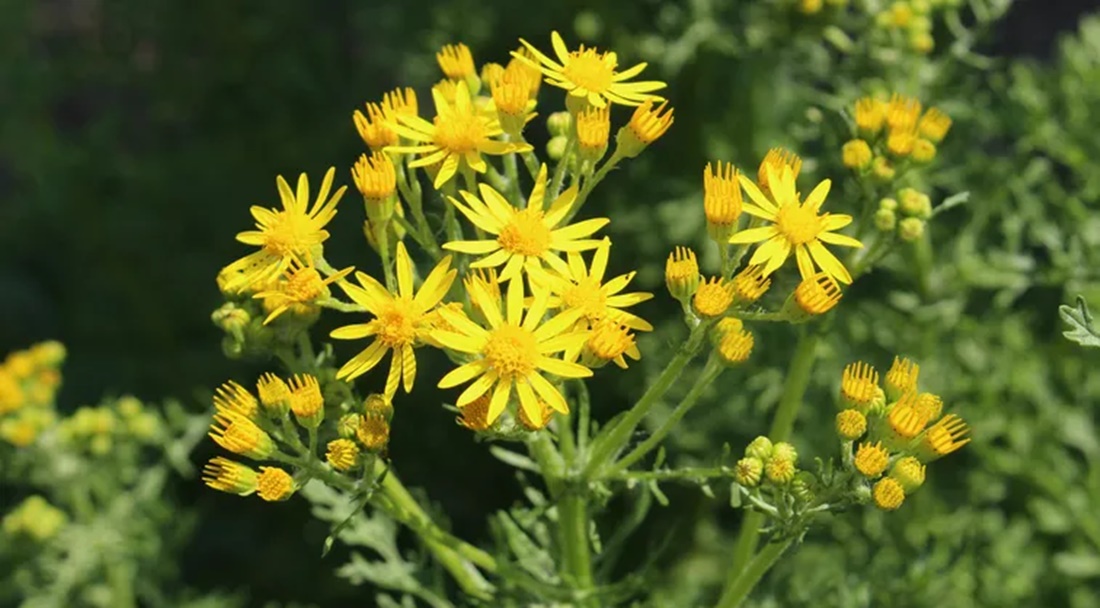 With its yellow flower heads, the ragwort (Jacobaea vulgaris) or ragwort has a summery and friendly effect. / Ragwort: This herb can even kill horses

But the harmless-looking plant is very poisonous. And it’s spreading in many states.

Where does Ragwort grow?

Although ragwort is not an invasive species, it has increasingly appeared in pastures, meadows and especially on roadsides in recent years. Sometimes it is also found in near-natural gardens or on overgrown green spaces. Ragwort thrives particularly well in dry, loamy soil.

Ragwort is not notifiable in Germany. In Austria, however, a find must always be registered.

The wild-growing field herb grows up to 100 centimeters tall, and significantly larger in nutrient-rich locations and when there is a lack of light. The leaves grow irregularly and are pinnate, but not hairy. Its upper side is dark green, the underside is a little lighter.

Ragwort blooms between June and August. Its flowers are bright golden yellow and between 15 and 20 millimeters in size.

Is Ragwort poisonous to animals?

According to the North Rhine-Westphalia Chamber of Agriculture, the older shoots of the plant are particularly toxic. These contain the most liver toxins.

The plant is poisonous to horses and cattle, even in relatively small quantities. Sheep and goats are much less sensitive. Although the animals do not usually eat the bitter herb in the pasture, it can get into the feed when making hay, where it is more difficult for the animals to select. It is therefore a danger, especially for horses, and can lead to death.

At what level is Ragwort poisonous to horses?

When poisoned, the animals show the following symptoms:

Is Ragwort Poisonous to Rabbits?

Is Ragwort Poisonous to Humans?

Yes, Ragwort can also be dangerous for humans above a certain level. As in animals, it damages the liver. Parents should therefore make sure that children do not put the plant in their mouths or eat it.

If you or your children have eaten the plant, call the poison control center.

If the ragwort was consumed, symptoms of poisoning such as severe pain in the gastrointestinal tract can occur. There is also a risk of liver damage.

Why is ragwort poisonous?

The parts of the plant contain unsaturated pyrrolizidine alkaloids (PAs), which in themselves are non-toxic but can be converted into toxic breakdown products in the liver. These substances are known to cause life-threatening liver damage in humans and animals.

Animal experiments have also shown that unsaturated PAs are carcinogenic. According to the Federal Institute for Risk Assessment (BfR), a tolerable daily dose cannot be specified. “The intake of PA should be avoided as far as possible for precautionary reasons,” emphasizes the institute. The question of whether PAs actually have a carcinogenic effect in humans has not yet been finally clarified.

Which plants can ragwort be confused with?

Ragwort can easily be confused with other plants. These include:

To avoid confusion, you should definitely pay close attention to the leaves and flowers. It can also help to rub the leaves between your fingers. This creates an unpleasant and very strong smell.

Leaves of common groundsel (Senecio vulgaris), a related and similarly poisonous species, have occasionally been found in packaged salads. The BfR therefore recommends taking special care when harvesting and preparing lettuce, leafy vegetables and herbs. Consumers should clean them well before eating and discard anything they don’t recognize as an edible plant.

What can you do about Ragwort?

According to the Farmers’ Association, the herb is spreading from embankments, paths and roadsides: “More and more areas are being left to their own devices.” Although this makes sense for bees, it is counterproductive if the ragwort multiplies on it. “One should set a priority here, in the direction of animal welfare,” said the association. The herb must be mown before flowering. This can prevent it from spreading. The seeds, which remain germinable for several years, cannot spread as a result of the measure.

The Chamber of Agriculture also advises cutting out individual plants before they bloom. They should then be disposed of in the organic waste bin and not in the compost. In addition, ragweed can also be combated with biological and chemical agents.

But ragwort is not always bad. It can also be useful as it provides food and habitat for some insects such as various species of flea beetles.

Ragwort also serves as a food source. For example, the blood bear – also known as the scurf bear (Tyria jacobaeae) – is considered a predator of the plant.

Why is Ragwort spreading so quickly?

The strong spread is often attributed to climate change and extreme weather conditions. Because the yellow-flowering plant is extremely stress-tolerant and can withstand extreme drought well.

When there are longer periods of extreme drought – as in recent years – open ground areas arise in the grassland when the grasses wither. The poisonous ragwort and other ragwort species can settle very well on this fallow land.

The BfR assumes that the number of poisonous ragwort species has increased due to the ban on certain sprays in Germany.

There are a total of around 40 groundsel species and subspecies in Germany. In addition to the ragwort, the common groundsel or ragwort (Senecio vulgaris) is one of the highly poisonous plants. It visually resembles the edible arugula. All other native ragweed species investigated to date – as well as the non-native but now naturalized species narrow-leaved ragweed (Senecio inaequidens) and spring ragweed (Senecio vernalis) – also contain pyrrolizidine alkaloids.