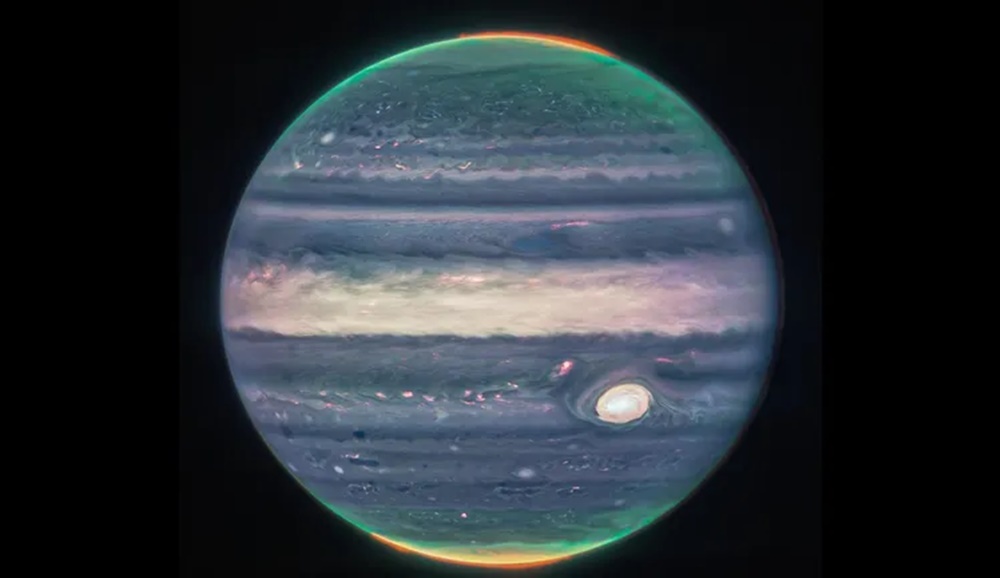 Astronomers around the world are excited about new images of Jupiter.

The latest images from the James Webb Space Telescope once again exceeded experts’ expectations. “We’ve never seen Jupiter like this, it’s all pretty incredible,” the AP news agency quoted Imke de Pater, an astronomer and professor emeritus at Berkeley University. “To be honest, we didn’t expect them to be that good,” she admits on the Nasa blog.

You can see auroras at the poles of the planet (shown in red in the upper image). The famous “red spot” is also visible. It’s a millennia-old hurricane so big it could engulf the Earth.

Another image shows Jupiter and its immediate surroundings. In addition to the planet, its thin rings and the two moons Amalthea and Adrastea can also be seen on it. The fact that all of this can be captured in one recording is “remarkable,” says de Pater.

However, the images do not show Jupiter in the reddish-brownish colors the planet is known to have. That’s because they are photos taken by the James Webb Telescope’s three high-sensitivity infrared cameras. These capture wavelengths that are invisible to the human eye. The researchers therefore colored these infrared images. The photo at the top shows the images from all three cameras superimposed: They are each colored reddish, yellowish-greenish and light blue.

The brightness in the representation of the second image shows extreme heights, explains Webb scientist Heidi Hammel. The bright spots and stripes therefore showed very high cloud tops from storms. The dark stripes, on the other hand, are regions where there are usually no clouds.

The correct superimposition of the numerous images from the three cameras is much more complicated when recording images of objects as close as Jupiter, since the rapid rotation of the planet poses a great challenge.