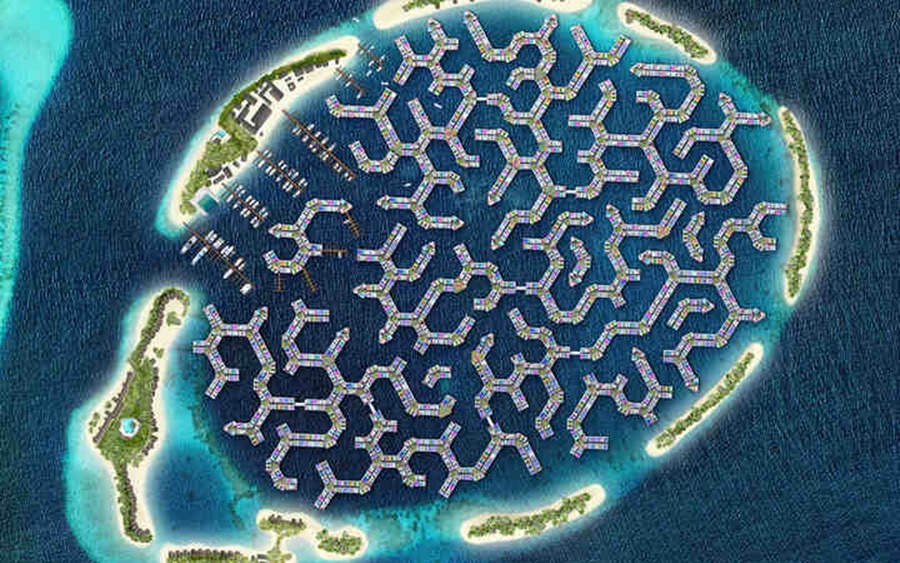 The Maldives have a problem: The archipelago is becoming more and more popular – not only with tourists. But the capital of the locals is already far too crowded. Now a new city is to be built in an unprecedented format.

Next level city building: The Maldives is not only struggling with an increasingly crowded capital. Rising sea levels are also causing problems for the island state.

To ensure that the residents do not perish or move out, innovative new ideas on how to continue to live despite these problems have been worked out for a long time. The result was a spectacular design that was officially approved at the end of June.

Click for Maldives tours with the best price guarantee

The Dutch company Dutch Docklands wants to build a floating city. It is said to be just 15 minutes by boat from the capital, Malé, and will be attached to the seabed with chains – so it won’t just float away.

The total of 5,000 apartments are not to be “connected” individually, but are located on crooked concrete slabs to which the chains are attached. A first visualization clearly shows this.

The individual panels are connected by means of bridges and boats.

Plus point for seasick people: the city is not supposed to slide back and forth with the water. The “Floating City”, as the floating city is officially called, will be built in a lagoon over coral reefs. The water is calmer there and there are hardly any waves.

Construction of the “Floating City” has already begun, final approvals are pending

In addition to residential buildings, hospitals, shopping centers, schools and leisure facilities should also find their place in the “Floating City” so that people don’t always have to commute.

The concept is by no means a dream of the future: the first block is already being built, which is to be connected to the future location of the city.

Starting next year, locals will be able to visit the property and “see first-hand what the city will look like,” according to a statement.

Only a few permits are still pending, so that further construction can start in January 2023.

The capital of the Maldives, Malé, is just 6 square kilometers in size and just one meter above sea level. At the last survey in 2014, just over 153,000 people lived in the city. During the Corona peak phase, the capital was taboo for tourists.