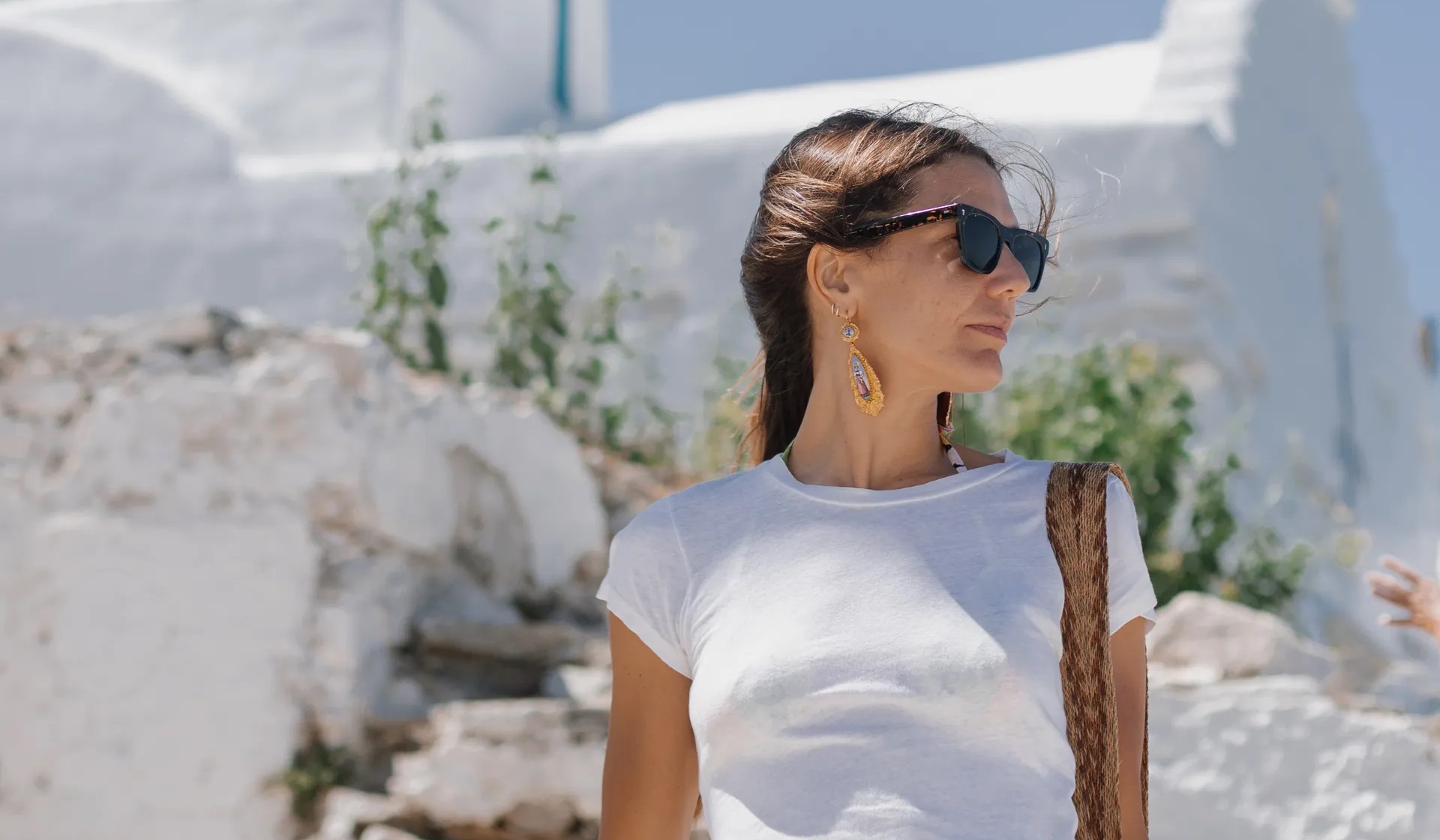 Margherita Missoni reveals her hot spots on the island of Paros in Greece, a summer destination that is worth visiting. / Best places in Paros Island

While Santorini and Mykonos take the lion’s share of the Cyclades, an island located 45 minutes away radiates a more discreet, but just as powerful charm:

Paros, the place where fashion designer Margherita Missoni and her friends, Eugenie Niarchos , jewelry designer, and Tatiana Santo Domingo, from the Monegasque princely family, spent their holidays in July.

With its quiet beaches, its crystal clear water and its villages dotted with bougainvillea, Paros seduces with its landscapes, but also with its gastronomy celebrating freshness, centered around seafood. “Greek cuisine is exceptional here, more than anywhere else “, explains Margherita Missoni. The young woman reveals her favorite addresses on the island.

Recently opened, this hotel The Luxury Collection is located just outside the port city of Nassoua. With its whitewashed adobe walls, flat roofs and colorful bougainvillea, it perfectly embodies the architectural style of the Cyclades region.

Earthy, cream-colored tones dominate in the lobby and in the rooms, but are dotted with touches of color, present on a sofa for example, or on a classic vase painted with a Greek face.

“I like the fact that the hotel is not too big, that it is quite intimate. The rooms may be adjoining, but you really don’t realize it,” emphasizes Margherita Missoni.

The Cosme hotel has a half-moon infinity pool (the shape of which follows that of the Aegean Sea below), but also a private beach club and a spa where you can observe the starry sky and the twinkling lights of the city of Nassoua.

The bonus? The hotel restaurant, Parostià, managed by chef Yiannis Kioroglou, previously based at La Guérite restaurant in St Barth. It offers a Mediterranean and Greek menu. Tip: order the lobster.

The Parilio is also one of the best hotels on the island. Picturesque and design (local works of art decorate all the rooms), it includes a superb swimming pool in the shape of a cross.

Where to eat? / Best places in Paros Island

With its turquoise tables and chairs spread out over the stones of Nassoua’s main square, the Mario restaurant has transformed the seaside into an open-air dining room. At sunset, the terrace is very lively. Customers sip local wines, eat ceviches or grilled fresh fish. “It’s a magical place,” says Margherita Missoni. His favorite dish? “The marinated zucchini salad, absolutely exquisite”.

Another unmissable address: Tsachpinis, the restaurant located just next door and belonging to the brother of the owner of Mario. Tsachpinis specializes in traditional Greek dishes. You can tell the two restaurants apart by the color of their chairs. Those of Tsachpinis are royal blue. Best places in Paros Island…

What to visit? / Best places in Paros Island

Besides the beach, Margherita Missoni suggests visiting the Byzantine church of Panagia Katapoliani. It was built before Christianity became the state religion of the Roman Empire.

The interior is a work of art in itself, an iconic place in the truest sense of the word. It is adorned with religious icons, depicting holy figures in golden tones, as tradition dictates. Many icons are adorned with a riza, a sheet of metal intended to protect them. Two golden chandeliers descend from the ceiling, while votive offerings, such as silver fish, emblematic of the fishing communities of Aegan’s Island, hang in front of icons.

The towns of Parikia and Nassoua are full of very charming shops. Margherita Missoni recommends getting lost in their winding streets, lined with flowers and bathed in sunlight.

During her trip, the designer notably stopped at the antique shop Moods, and at Retro Greco, a vintage shop in Parikia, in which she bought T-shirts. She also visited Anthologist, an offshoot of Andria Mitsakos’ furniture, clothing and jewelry boutique. There she bought bathing suits for her children and boxes of vintage matches for her friends.

“Cool things to remember your vacation!” she says.