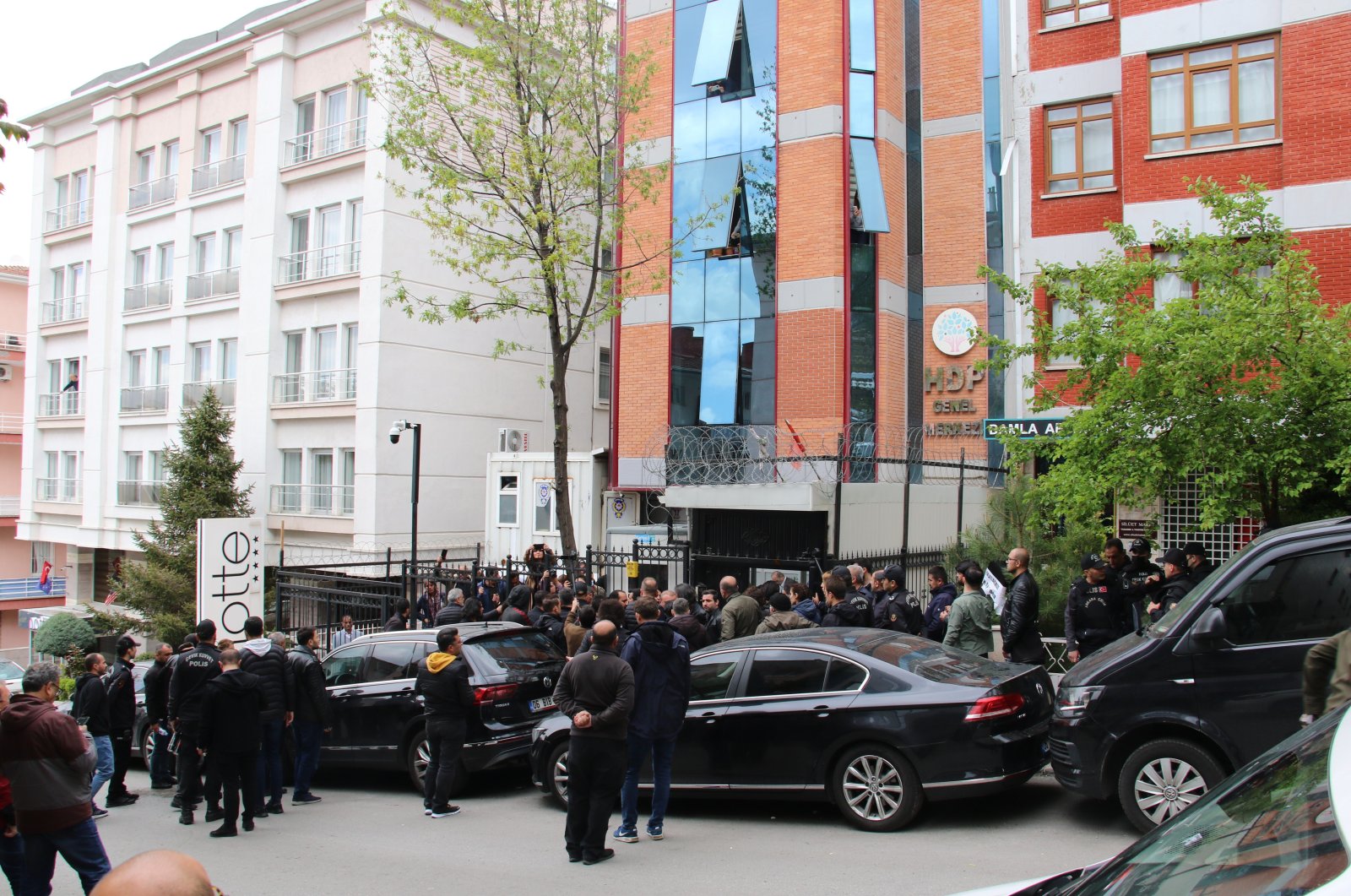 Turkish police detained six pro-PKK Peoples’ Democratic Party (HDP) members for refusing to cooperate after tensions with the parents of kidnapped PKK terrorists who left a black wreath in front of the party headquarters in Turkey’s capital Ankara on Thursday.

The fathers of three individuals who were kidnapped by the PKK, who had been staging a demonstration in front of HDP’s Diyarbakır headquarters, left the wreath, which had a message saying “We want our children back from the HDP.”

The fathers, identified as Celil Begdaş, Süleyman Aydın ve Nihat Aydın then made a statement criticizing the party.

Tensions increased after HDP Batman Deputy Ayşe Acar Başaran came to the scene and argued with the fathers.

Other HDP members tried to tear down the wreath, which further increased tensions, as police intervened.

Meanwhile, inside the headquarters, HDP Spokesperson Ebru Günay and others verbally and physically provoked the police, as the security forces asked them to wait inside until de-escalation of tensions, but the former refused.

A police officer was injured in the scuffle that broke after the incident.

The protest started when Hacire Akar turned up on the doorstep of the HDP’s Diyarbakır office one night, demanding to be reunited with her son. Akar’s son Mehmet returned home on Aug. 24, 2019, giving hope to other families. A week later, on Sept. 3, 2019, families inspired by Akar staged a collective sit-in protest.

The demonstrations have since spread to other provinces, including Van, Muş, Şırnak and Hakkari.

Families have not given up their posts despite difficult conditions, at times being threatened or ridiculed by HDP officials and those with links to the PKK terrorist organization. The protest continued despite the coronavirus pandemic, with the families taking the necessary precautions.

A significant number of suspected terrorists have begun to flee the PKK and surrender, but many terrorists lack the courage to leave the group out of fear of severe punishment if caught.

The HDP, long facing public scrutiny and judicial probes over its ties to the PKK, is under pressure from the growing civilian movement. Various groups from around Turkey have supported the Kurdish mothers in their cause, with many paying visits to the protests to show their solidarity.

In its more than 40-year terror campaign against Turkey, the PKK – listed as a terrorist organization by Turkey, the United States and the European Union – has been responsible for the deaths of 40,000 people, including women, children and infants.